Do you need a Solar System? I’ve got one for you. 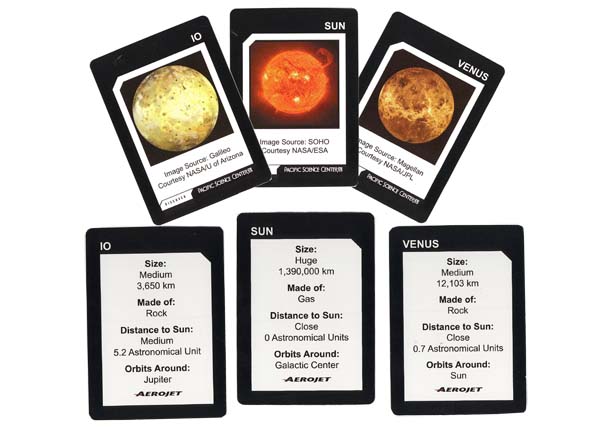 Bear with me, deep linking to the following website doesn’t work, so follow these quick instructions to acquire your own Solar System:

So a few years ago, shortly after receiving my teaching certificate, Pluto was “demoted.” [2] (In fact, my very first AstroInfo [2] was about the new definition of planet!) Although people have many, many feelings about this, and there’s an ongoing argument, I’m going to ignore that part of the story for the time being.

Well, the first question is easy. You most definitely still teach about Pluto. It’s not like the demotion made it evaporate out of our Solar System or disappear into nothingness. In fact, now it is probably more important to teach Pluto, since it’s the best-known representative of several whole classes of objects (Kuiper Belt Objects, Plutinos, Dwarf Planets, and Trans-Neptunian Objects). As we discover more and more of these, kids (and adults) need to know at least where these new discoveries are taking place. Teaching about Pluto helps with that.

But if it’s not a planet, what is it? What do I call it? What if they change the name? How can I teach science, if science is changing all the time? Those first two questions you can look up on the internet. The second two suggest some thought.

How can I teach science, if science is changing all the time?

This is a great question, and it applies to more than just “The Pluto Debate,” but that’s where I started. And it turns out, I wasn’t the only educator working on this problem. Anna Hurst from the Astronomical Society of the Pacific [4], and John Ericson at the Lawrence Hall of Science [5] were also focusing on giving teachers a new way to teach the Solar System in the wake of The Pluto Kerfuffle. We were not in correspondence. We were not discussing this with each other, we did not meet and work on this problem together. In fact, I don’t think I met either of them until long after this.

Yet we all came up with the same solution: a set of cards or slips of paper, each with information about a different object in our Solar System.  Teaching the Solar System was going to have to evolve from “facts about each of the nine planets” to something that was more closely related to a lot of what planetologists actually do: classify, categorize, and identify. This mean that the new way of teaching the Solar System needed to involve dozens of objects, not just eight or nine, because there are actually dozens, hundreds, thousands of objects in our Solar System!

Besides the inherent flexibility and educational merit of this new activity, it also gives you a positive and fun way to teach about what happened to Pluto. You can allow your students to make their own definitions for planet, and see which objects fit (or don’t fit) their definition.

Anyway, I find it fascinating that the three of us came up with the same activity independently. I’m sure that many other teachers around the world also must have thought of this idea too, and so I claim no copyright or patent on the activity, but if you don’t have time to make your own set of 30-50 cards, you can (finally) just purchase a set from us – and support both my job and my planetarium while you’re at it!

Lawrence Hall of Science Gread Explorations in Math and Science [6] (since I can’t remember exactly which module has this activity, I’ll send you to the general link. If you know where it is, let me know!)

Astronomical Society of the Pacific’s The Universe in the Classroom, Issue #70 Hubble Observations of Pluto and Ceres [7]. Scroll all the way down to “Activity 1: Sorting the Solar System” and the cards are there [8].

There is also a printable (draft) version of my cards [9], but I recommend ordering a nice set from above, since all the attributions for the photographs are correct, and multiple people have proofread them. The drafts will get you through the activity just fine, but the cards are a bit better.